The power of pesto

How sustainable basil farming is helping an Ohio community

0 Shares
Reading Time:
2
Minute(S)
You probably cook with basil in your kitchen — for some people it’s a staple herb, and not something we give much thought to as we chop it up and sprinkle it into our food.

For a community in the American city of Cleveland, Ohio, basil is more than just a flavour enhancer. It’s a way to reintegrate back into the community, to grow food sustainably, and sell that food locally to chefs at organisations like Nestlé Professional.

Green City Growers (GCG) is a business a few blocks outside of downtown Cleveland which was launched and run by the non-profit, Evergreen Co-op. An urban farm, GCG is composed of a 3.5 acre growing area made up of 13 pools of purified water.

There are no traditional fields at the facility — all the leafy crops inside are grown floating on top of the pools. There are a number of herbs and leafy greens, including coriander and chives. But at a production rate of more than 135,000 kgs each year, basil is the cream of the crop.

This method of growing is known as 'hydroponic'. Though it sounds like it may use too much water to be environmentally friendly (there are 3.75 million litres of water in the facility at any given time), the opposite is actually true.

The benefits of this gather-filter-use-recycle system are huge. There is no runoff, like there can be in a traditional field. So the amount of basil that would usually require about 150 litres of water to grow requires just under 4 litres at GCG.

Young plants enter a pool at one end, and move down as they mature to be removed fully-grown at the other end. The pools are constantly in use, always being stocked with new plants at one end.

John McMicken, CEO of the Evergreen Co-op is a believer in the local farming benefits of the hydroponic system: "It’s part of a broader story for Ohio, which is water rich and protects that by only using a fraction of the amount of water for farming as other states are using. We’re hoping that techniques like the ones we use at Green City Growers will become a new trend, bringing vegetables closer to the table."

Growing 'close to the table' is important to GCG. That sits well with local businesses like Nestlé Professional, which bought around 15% of the basil grown at the farm in 2016 — about 23,000 kgs.

Both Nestlé Professional chefs and the processing facility are just a few miles from the farm. This central location makes GCG perfect suppliers of fresh basil that Nestlé chefs make into pesto — and it means that the companies can work together on their combined commitment to the local economy of Cleveland.

Also vital for the local economy? Jobs. John is passionate about the impact his organisation can have on local hiring, citing it as the most important reason for Green City Growers to exist:

"Our employees are why we’re here. We have 40 full-time employees, and most of them are from Cleveland city neighbourhoods — 85% of them, in fact. That group is also comprised of 80% minority employees and a total of 40% of our team come from a successful programme of hiring returning citizens — people who were formally incarcerated for non-violent offences — who are coming back to the workforce to positively impact their own lives and the lives of their families."

Our employees are why we’re here. We have 40 full-time employees, and 85% of them are from Cleveland city neighbourhoods. John McMicken, CEO of the Evergreen Co-op

It doesn’t end at hiring, either. Evergreen is a co-op, which means these employees are part-owners, benefiting from profits and participating in the decision-making that goes into running the business.

Most had no previous experience in farming and receive training on the job. This mixture of enriching development, empowering decision-making, and fair compensation has led to high retention rates at GCG’s as well as confidence in the quality of their team’s work.

Quality has long been a primary focus for Nestlé, and safety sits right alongside it. GCG’s facility is ideal for maintaining rigorous safety requirements, in part because it protects crops from some of the wilder elements of traditional farming.

"We have eliminated the risks associated with outdoor growing — birds overhead, wild animals — so we can keep an extremely clean facility," John explains. "Being indoors means we can also much more tightly control invasive pests without pesticides or herbicides. To deal with the potential of pests we release 'good bugs' like ladybugs to deal with 'bad bugs' like aphids."

Computerised systems are in place to help the agriculture team monitor all areas of the facility, including climate controls and water quality. Mobile monitoring means that these controls are covered at all times. From beginning to end, safety and quality is key.

For Nestlé Professional, there couldn’t be a better suited supplier of basil than Green City Growers. The programmes in place have benefits that support more than Nestlé’s business — they support its purpose – enhancing quality of life and contributing to a healthier future. 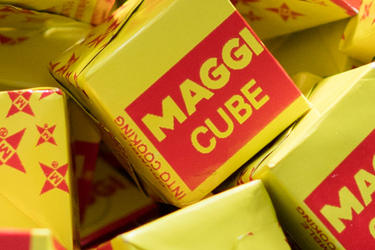