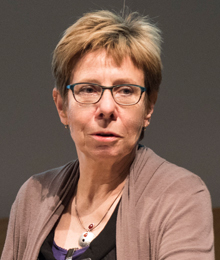 I am one of many scientists around the world whose work involves studying an ecosystem of diverse species. Some are already known to us, others have never been catalogued before.

This ecosystem is not deep in a rainforest, or miles under the sea. It’s inside you.

It’s the human gut ‘microbiome’, the vast colony of microbes that inhabit your gastrointestinal tract.

The average healthy adult has up to 2kg of bacteria in their gut, of thousands of different species.

With all these different species, it means you and I actually have more bacterial genes than human genes.

However, we’re not simply providing them with somewhere safe to live. They also help us by playing an important role in keeping us healthy.

We know there is a two-way communication between our gut and our brain.

The gastrointestinal tract is sometimes referred to as the human body’s largest immune organ or the ‘little brain’ within us.

It has up to 80% of our antibody-producing cells and is a vital part of our defence system. It also happens to be what we could call a ‘high-traffic’ channel.

Throughout our lives we consume things, inhale things, and swallow things, sometimes by accident.

Some of the microbes living in our gut may be native to us. Others might just be passing through. They may be helpful, or harmful.

When we’re born, our gastrointestinal tract is sterile, or almost sterile. In the first few minutes after birth, microbes begin to occupy it. Recent studies suggest this might even start in the womb.

Evidence points to the fact that this early microbial colonisation helps our body to defend itself against disease.

Very early on, our immune system must not only learn to recognise when a pathogen has entered the gut, but also to provide a quick and effective response.

The gut’s ability to function properly depends on the interactions between its three main components: the microbes, the intestinal barrier and the immune system.

By studying this ‘cross talk’ we can better understand how certain microbes in our gut can help to maintain our health, and why interfering with them may lead to problems.

It’s a subject we’ll be discussing in depth at the Nestlé International Nutrition Symposium this week.

Understanding the triggers that affect which microbes settle inside our gut, and when, is a crucial piece of the jigsaw we’re trying to put together.

We already know it depends on a number of factors, one being the way we’re born.

Vaginal delivery forces a baby to pass through the lower part of its mother’s body, where it collects microbes.

The baby is then usually placed on its mother, where it picks up more microbes from her skin.

Some studies demonstrate that babies born by caesarean, or those placed directly in an incubator, may be more susceptible to certain infections and allergies early in life.

It corresponds with findings from other studies, which show children brought up in rural, farming environments often develop fewer allergies than those who are not.

We’re much more hygienic than in previous decades. Although this has brought many public health benefits, it is not necessarily always a good thing.

Many scientists believe some aspects of modern life designed to make us cleaner and healthier may in fact be interfering with the microbes in our gut.

Antibiotics, for example, have been essential to society’s ability to fight infections, but we now know that repeated courses can upset the gut microbial balance.

It’s not only medicines. What we eat, the chemicals we put on our bodies and those we use in our homes can all have an impact.

If you study the gut microbes of someone with a particular disease, you’ll probably be able to say they have more of bacteria ‘A’ and less of ‘B’ than a healthy subject.

A number of conditions have been associated with changes in people’s gut microbes, including Crohn’s disease, different allergies, colon cancer, type I and II diabetes, and certain chronic inflammatory diseases.

At this stage however, this is mostly association. We still can’t make a definitive link between the presence of specific microbes and the onset of certain diseases.

In other words, it’s hard to say whether the presence of bacteria A is a cause or a consequence, of a condition, or sign that you may be predisposed to develop it.

Although each of us has a unique composition of microbes in our gut, we share a ‘core’ microbiome that is specific to us as human beings.

It’s thanks to high speed DNA sequencing that we now have such a huge amount of information at the molecular level about which bacteria make up our core gut microbiome.

Today the challenge for scientists is to integrate this mass of data that has been generated worldwide in a way that allows us to fully understand what constitutes a healthy gut microbial balance.

Research has taken us to the point where we can say that we know which microbes are in there, and to some extent what they are doing.

What we don’t yet have is a complete picture, especially as the gut contains a number of bacteria we have yet to identify.

The Nestlé Research Center and the Nestlé Institute of Health Sciences are involved in a number of scientific collaborations that are that are trying to fill in the gaps.

The ultimate goal will be to find out if by modifying these microbes, or their concerted function, for example by diet or nutrition interventions, we can change the course of certain diseases.