Our expertise is in making nutritious foods and beverages that support a healthy lifestyle. We want to share with consumers worldwide. Through the scope and power of our marketing, we are promoting more nutritious options to consumers – responsibly and transparently.

We target our marketing efforts toward parents and caregivers, helping them to make informed decisions on how to keep their children and families healthy. We have also developed robust guidelines to restrict marketing that targets children.

In 2019, we audited our operations to ensure they adhere to our policy on marketing to children. We partnered with the Global Alliance for Responsible Media and continued to focus on being industry leaders in compliance. Read more about it in our 2019 progress report.

Double the outreach of our efforts to promote healthy cooking and eating and healthy lifestyles for individuals, families and their pets

Technology for healthy lifestyles in Australia and Brazil

It’s been found that children who play sports have improved cognitive functions. In 2019, we involved young people in more active lifestyles with the development of two new apps: the Milo Champ Squad app , launched in Australia, and NesPLAY, launched in Brazil.

In Thailand, the Maggi Mum and Me cooking club brings together simple, exciting and healthy recipes to encourage parents to cook homemade meals for their families every day.

Children between the ages of 5 and 17 should accumulate at least 60 minutes of exercise a day to keep both their bodies and their minds healthy. Coming together with FC Barcelona, Nestlé’s Milo brand launched the first Milo Champions Cup in July 2019. This initiative, which was launched across Asia, Africa and the Americas, brought together 10 teams, a total of 80 children under the age of 12, to participate in a five-a-side tournament. During the games, the children who showed the best behavior and fair play were awarded with the ‘Milo green card’ in recognition.

For over 50 years, Milo has sponsored events, involving millions of children globally each year. The tournament is the most recent addition to a long-standing tradition of Milo supporting sports programs for children. It contributes to our wider Nestlé for Healthier Kids global initiative to help 50 million children live healthier lives by 2030. 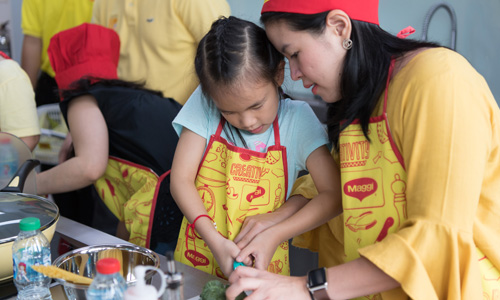