Around the world, the farming population and the rural communities in which they live are aging. We can increasingly expect to see this impact our supply chain. Many farmers also face economic pressures resulting from historically low food prices and are dealing with the effects of climate change. We support farmers to meet these challenges. Our initiatives help make agriculture an attractive career choice for young people, which is essential to ensuring the long-term sustainability of our supplies.

In 2019, we received results from rural development assessments in China, India and Pakistan. We also continued to develop agripreneurs and train farmers on sustainable farming methods. Read more about it in our 2019 progress report.

Our Theory of Change model

To identify and prioritize issues and suitable interventions, and measure the outcomes, we have adopted a Theory of Change (ToC) management approach.

The five stages of ToC are to:

By using the ToC model, we can:

Of course, needs and situations differ across markets, so we have developed a generic Group-level ToC for key categories, which can be reviewed and adapted to suit local requirements. Local markets can suggest changes to Nestlé to meet their needs. When approved, relevant KPIs are developed, and these are consolidated at Group level, creating a comprehensive model for measuring and monitoring impacts, which is reviewed annually. 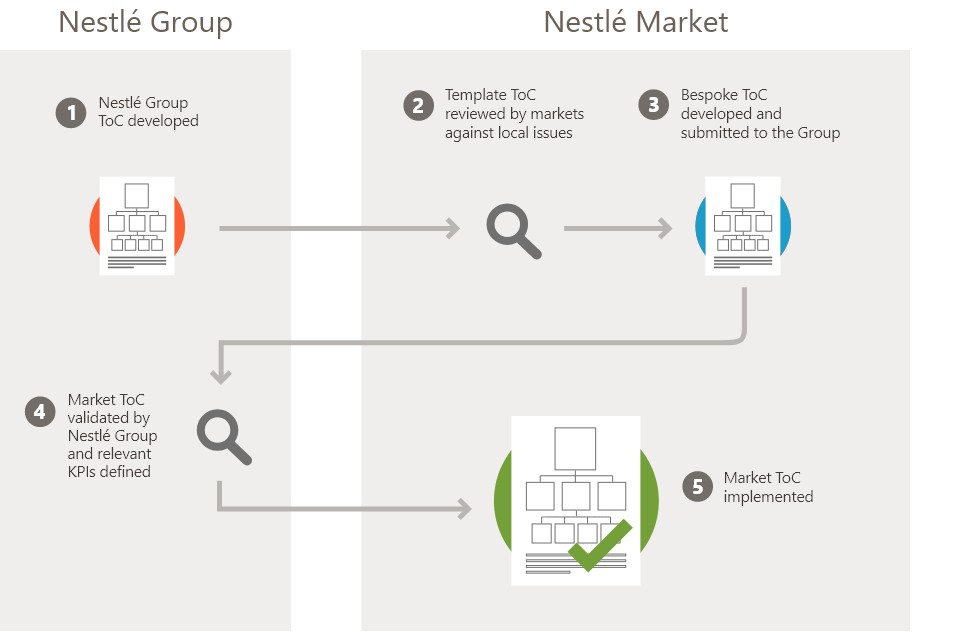 Our Dairy Commitment Model in Mexico

Nestlé has sourced milk and whey from Mexico for local production facilities for the last 80 years. To support farmers in implementing best practices and reduce production costs – the main challenge faced by the dairy industry in Mexico – we have developed the Dairy Commitment Model.

The model provides help with financing training and technical assistance, helping to develop a more sustainable supply of fresh milk and whey. Since 2016, we have invested MXN 36.5 million (CHF 1.87 million) to develop dairy farmers and milk transportation systems.

At the core of this is our agripreneurship program. By the end of 2019, 296 agripreneurs had been trained in the Mexican dairy sector. These agripreneurs shared their training with around 3500 farmers, benefiting 8617 families.

Teresita de Jesús Valdés Arciniega is a third-generation dairy farmer and second-generation Nestlé farmer – and now a Nestlé agripreneur too. Having qualified as a veterinarian, she works on the family farm in San José la Epifanía, Mexico State. Teresita, her father and her brother have all completed Nestlé’s agripreneurship training program and have gone on to implement changes to improve the farm’s sustainability, including improved animal feed, solar panel electricity generation and better waste management. Coupled with improvements in farm infrastructure, land management, animal welfare and animal quality, the farm has been able to grow dramatically, from five milking cows 30 years ago to a herd of 93 and 220 animals in total today. Teresita is currently taking a Master’s degree in animal reproduction at Wisconsin Madison University, to further develop her knowledge and capabilities on dairy cattle reproduction to make an impact on the dairy farming sector.

The dairy sector in Brazil is under pressure to become more productive and sustainable. Many farmers are quitting their business for economic reasons. Nestlé’s agripreneurship program helps farmers develop the skills they need to professionally manage their farms. This includes calculating their income, assessing production costs, understanding cash flow and planning for investments, as well as improving feed and fodder production and dairy herd management.

Our program is creating a new generation of young, family-owned business entrepreneurs who continue dairy farming, and is providing clear results:

José Eduardo began working on his father’s farm in Cachoeira Dourada City, Ituiutaba in 2014. After graduating from university and returning home, José redesigned the farm’s business plan. He decided to invest into the dairy operation, transforming it into the main activity on the farm. Since then, with coaching from Nestlé, the farm has increased its daily production from 2000 liters to 13 000 liters in just four years. 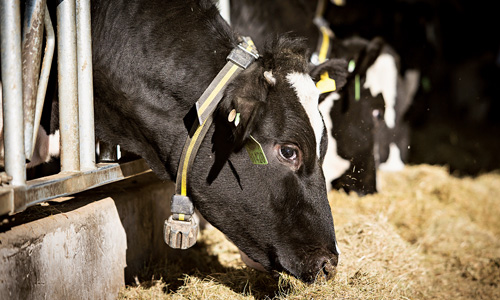 Historically, Indonesia has had to import most of its dairy due to low productivity, small herd sizes and low farmer incomes, all of which pose risks from a supply chain perspective. Through our agripreneurship scheme, we aim to address these issues and transform the dairy sector in the country.

Occupation: Dairy farmer
Background: Set up his farm in 2016

Sandi Febrianto is an Indonesian dairy farmer who is benefiting from this support. In 2016, at the age of 26, Sandi set up his farm in Songgon, East Java Province, with just one milking cow and one female calf. In 2018, with training, guidance and funding support from Nestlé Agri-services, he began developing his farm infrastructure with a view to increasing his herd size. Within just two years, his herd had grown to 50 animals with 22 milking cows, with a 60% increase in yield.

Developing the next generation in the UK

UK dairy is facing a number of challenges. The most pressing of these is the growing impact of climate change, combined with increasingly difficult economic conditions, which mean that there is less investment at farm level. Overcoming these challenges requires greater collaboration between farmers, civil society organizations, the government and the industry to develop tangible and measurable benefits for all.

As part of this, Nestlé UK has developed strategic partnerships with 100 farmers, with the ambition of helping them to improve their long-term livelihoods. Our agripreneurship program is focused on driving farmers’ ability to react to a changing production environment and a rapidly increasing consumer demand for milk produced sustainably and meeting increased ethical standards. To support that end, we have developed our Next Generation Dairy Leaders program.

The program exposes young farmers to all aspects of the supply chain, including developing their understanding of consumers’ expectations and enabling them to meet and exchange ideas with politicians, such as the UK’s Agriculture Minister, and other decision makers in the agricultural sector.

To date, six farmers have undertaken the program, and one recently won the coveted ‘Young Farmer of the Year’ award. Tangible benefits have been recorded across the participants’ farms since the program began in 2014:

Indonesia has a long history of coffee growing, but production levels have declined in recent years. At the same time local demand has increased. Most producers are smallholders, but they have little access to new practices and services. As a result, plantations are often old and not well managed, with low yields and poor quality. This leads to low incomes and farmers abandoning coffee for other crops.

Nestlé has been working directly with farmers to improve farm efficiency and has joined forces with GIZ (the German International Development Agency) and the Farmer Business School to further improve coffee-farming practices in selected areas in Indonesia, as well as in the Philippines and Thailand. Through our agripreneurship program, we aim to develop participants’ knowledge of best farming practice and business economics to ultimately improve the viability and efficiency of their farms.

Our specific goals are to:

Launched in 2018, the project works directly with 7000 smallholder farmers and their families in Indonesia, as well as a further 3500 in Thailand and the Philippines. Farmers are trained in the use of better agricultural practices, including coil and nutrient management, rejuvenating old coffee trees and how to diversify crops efficiently and sustainably. The program also works to strengthen local farmer groups and organizations, share lessons learned with other stakeholders and monitor and evaluate the results of the work. Through this, we aim to increase farmers’ yields as well as their resilience to the challenges they face.

Supattra Ngoenthong is a Nescafé Plan Ambassador in Thasae district, Chumphon province, Thailand. When she began farming in 2000, she found that the yield was not enough to be financially sustainable. After attending a Nestlé training module, she adjusted her farming practices and implemented new soil management, intercropping and grafting techniques – which had an immediate positive impact in cost reduction and yield increases.

Supattra has since established a farmer group with 15 of her neighbors to bulk-buy fertilizer and develop systems for sharing organic fertilizer (compost), further reducing costs. She has continued her training, which has included a visit to study farming techniques in Vietnam, resulting in her adopting new systematic intercropping practices. Her farm and group members now provide coffee to Nestlé suppliers directly as part of our Respectfully Grown initiative.

Direct farm sourcing is a strategic element of our plan to develop supply chains for raw materials. Currently 50 local farms supply approximately 8000 tons of fresh fruit and vegetables to Gerber Nutrition’s factory in Rzeszow, which makes baby food products. However, the aging local farming population poses a risk to this supply chain, with only 22% of farmers being under the age of 55.

In response, in 2019, together with partners Agrinavia, ARiMR, InHort and PIR, we introduced our Young Farmer program to develop entrepreneurial opportunities. Eight participants took part in three sessions led by industry and research experts, designed to enhance the farmers’ management and communication abilities as well as providing insights into the latest farming technology and resources. Topics included information on EU farming grants available for young people, techniques for plant protection and residue control, and farm management software. Participants are encouraged to develop innovative management systems for their own farms and to share their learning with their local communities.

Training will continue in 2020, with farmers developing their knowledge through visits to Nestlé production sites and on-farm pilot trials for software and new technologies.

Piotr Potoniec works on his parents’ farm in Podegrodzie, southern Poland, where they grow apples. In recent years, overproduction of apples in the region has led to a general reduction in the quality of produce, so refocusing on quality can give farmers a competitive advantage. As a member of the Nestlé Young Farmer program, Piotr is learning ways to improve the quality of the crops grown on the family farm through best practice techniques and technology. The training is also helping him to diversify into niche products, such as baby food apples, which can provide additional income.

Through the Nestlé training, Piotr has also gained knowledge of other EU funding and support available to young farmers. He recently applied for an EU grant, which he plans on using to improve the infrastructure of his farm and diversify his crops.