We are supporting new ideas that can help address some of the world’s greatest sustainability challenges.

In 2010, we started the Creating Shared Value (CSV) Prize to bring the innovations of social entrepreneurs to life. Rewarding brilliant business ideas, the prize expands their impact by scaling up or replicating them.

Supporting innovation with our R&D Accelerator

We support innovative ideas from Nestlé employees, startups and students through our global R&D Accelerator program. Since launching the program in 2019, we have had more than 116 participants. Examples of recent projects include:

The 2020 Nestlé Creating Shared Value (CSV) Prize, developed in partnership with Ashoka, aimed to identify system-changing projects that support Nestlé’s vision that none of our packaging, including plastics, ends up in landfill or as litter.

Entitled 'How do we create a waste-free future?', the winning initiatives addressed challenges such as:

Ten finalists have been selected based on their potential for positive impact for a waste-free future and for collaboration with Nestlé. From these, one winner was chosen by the Nestlé CSV Council, with a further four initiatives receiving special commendation.

The winner received a cash prize of CHF 100 000. Each specially commended finalist also received CHF 40 000. They benefit from Ashoka’s online resources and workshops to explore potential collaboration with Nestlé, as well as a mentoring program. Through this financial investment and technical resources, the best initiatives can amplify their impact, scale up and/or replicate their solutions around the globe.

Learn more about the finalists and the winner announced on July 5, 2021.

Our joint winners of the 2018 CSV Prize

In 2018, we awarded two entrepreneurs as joint winners of the prize for their outstanding businesses: Mumm from Egypt and Fishers and Changemakers from the Philippines.

Mumm is an online platform that offers healthy homemade food for delivery, while giving the talented home cooks who make it the chance to earn money. In two years, the Cairo-based company created more than 110 jobs and delivered over 45 000 meals.

Fishers and Changemakers works with fishermen in the Philippines who are committed to sustainable fishing, buying their catch at market prices, and packaging and marketing it effectively.

Agro-Hub is an agricultural production and marketing agency in south-west Cameroon, working to connect smallholder farmers with sustainable markets.

It has built a small integrated factory to transform cassava, a staple crop in Cameroon, into starch and garri, a type of tapioca, and sell these value-added goods to consumers through its own fresh food store (Agro-Mart). So far, the agency has helped more than 700 farmers increase productivity and income as they build long-term sustainable relationships with buyers.

Agro-Hub received a prize of CHF 300 000, which it intends to use for upgrading its cassava processing facilities. This increase in production capacity will allow it to support more farmers, and contribute to improved food security and living conditions.

“At the beginning, the production processes were carried out manually, but the Nestlé CSV Prize will help us in establishing a modern, integrated starch and garri factory. With this factory, we will be able to reduce the production process to one day or a few hours, potentially increasing our production to 10 tons of starch per week.” 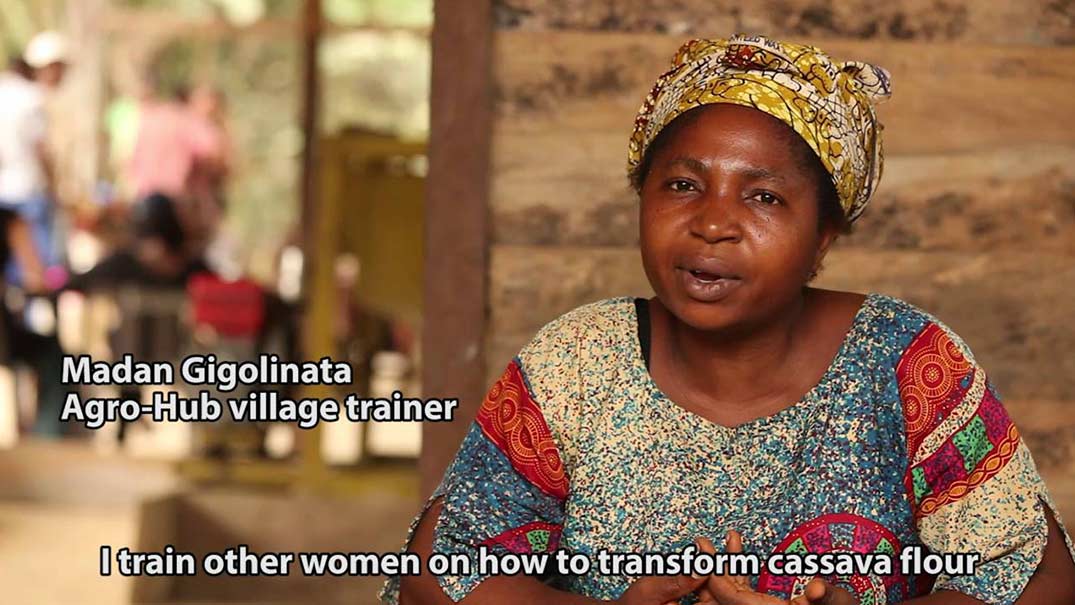 Pioneering the sustainable extraction of vanilla

Natural Extracts Industries, a social enterprise from Tanzania, was selected as the 2016 CSV Prize runner-up for pioneering the sustainable production of natural flavour extracts from vanilla, cacao and orange.

Working with farmers and co-operatives, NEI helps build local capacity through sustainable agricultural practices such as agroforestry, intercropping, drip irrigation and composting. It has also developed manufacturing operations that add value to the products supplied by smallholder farmers.

NEI has invested the CHF 200 000 prize money to expand its network of smallholder farmers and maintain the subsidy scheme it introduced to reduce barriers to entry.

“Our business model is predicated on creating value for business and community alike. On the business front, we offer customers a natural product that follows the global clean-label trend. And for the community, the incremental income received by farmers enables women and youths to succeed without having to migrate to urban centres, where they may not even find employment. The Nestlé CSV Prize will bring us additional financial strength and credibility.” 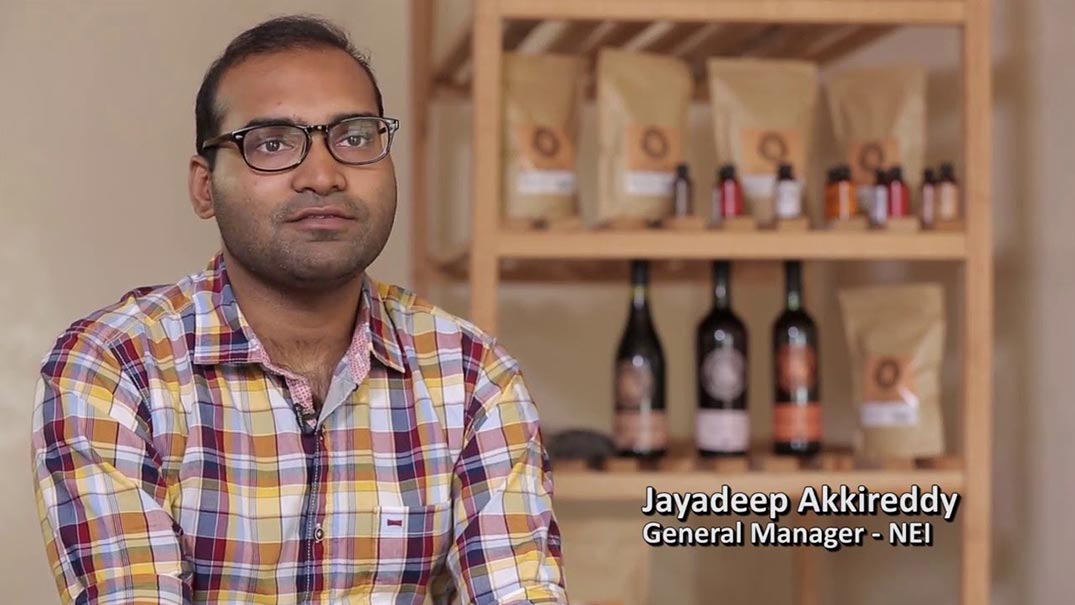 Honey Care Africa, a fair trade honey company, provides opportunities for thousands of rural smallholder farmers to generate additional income by helping them become beekeepers. It aims to create a commercial, efficient value chain for honey by training smallholder producers, organising them in networks (SWARM Clusters) and guaranteeing a market for their honey at fair prices, including a ‘base of the pyramid’ mass market for single servings of honey. 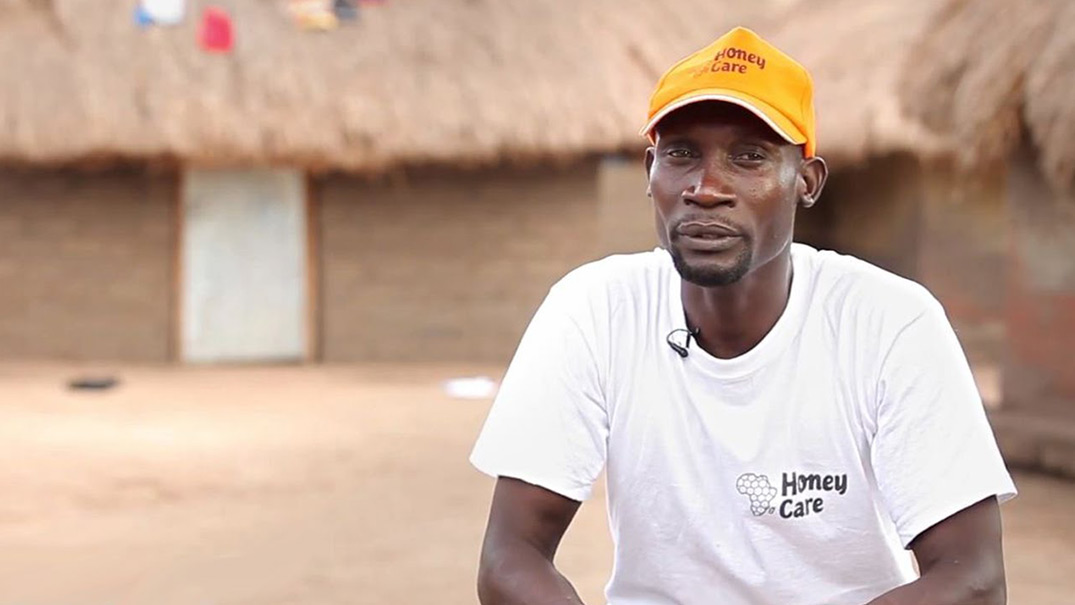 MSABI is a not-for-profit organization that runs rural water, sanitation and hygiene (WASH) programs in Tanzania. The programs include water points, sanitation, participatory education and ceramic water filters, and are tailored to meet the specific needs of local communities. 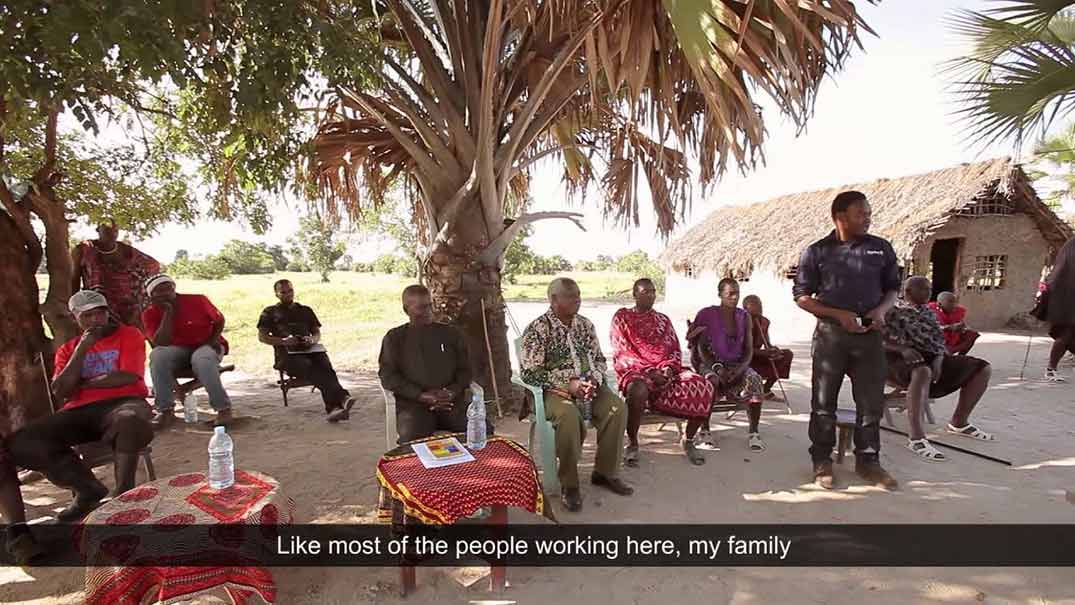 Sanergy is a social enterprise that manufactures and franchises small-scale high-quality sanitation facilities to local micro-entrepreneurs. It collects and removes human waste from the community and converts it into high-value by-products such as fertilizer and energy. 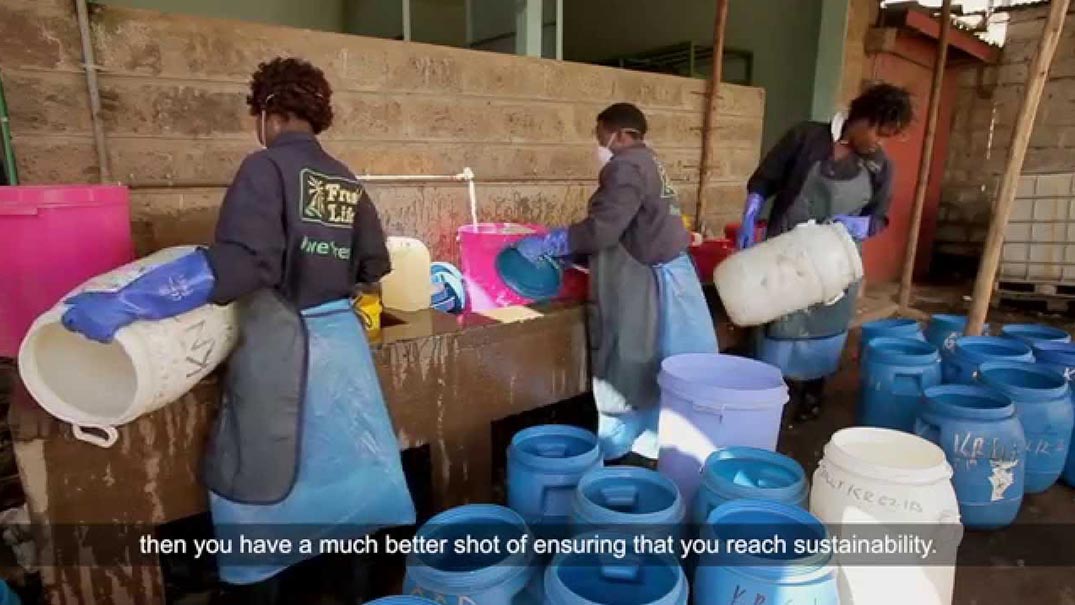 Fundación Paraguaya sets up agricultural schools in poor rural areas of Paraguay, enabling students to develop the entrepreneurial and practical skills they need to lift themselves out of poverty. The nonprofit organization works with each school to identify suitable micro-businesses to set up (for example, milk and egg production, organic gardening, beekeeping) and provides students with hands-on training. The money raised covers the schools’ operating costs without the need for government funding. The Nestlé CSV Prize helped fund a new school in San Pedro, the fourth to be set up by Fundación Paraguaya.

arcenciel is a Lebanese not-for-profit organization running programs related to agriculture, employment, environment, health, rehabilitation, social and youth. Wataneh, the Lebanese sustainable agriculture network, was launched in 2009 to improve the sustainability and the competitiveness of Lebanese agriculture throughout the value chain. Initially, farmers are helped to improve their yields and the variety of crops produced, and to reduce the use of chemicals while increasing the use of environmentally friendly techniques and improving their income.

Excellent Development, a UK-based not-for-profit organization, works with local partners in Kenya to support rural communities in drylands to build sand dams. These provide clean water for life and the opportunity to grow more food to eat and sell. Excellent Development works with local communities, organized in self-help groups, to identify sections of local rivers where sand dams can be built. The community invests at least 30% of the resources needed to complete a concrete sand dam.

In September 2020, Nestlé again collaborated with Ashoka, along with key members from Purina and Vittel to establish the Scaling Social Impact Program (SSIP). Through this new platform, we are setting out on a journey of mutual learning alongside motivated social innovators around the world.

Participating social innovators of the SSIP were partnered with an advisor from either Purina or Vittel. These advisors provided continual support to develop solutions to some of society’s most pressing issues. Purina and Vittel Thought Partners met with innovators on a monthly basis to feedback on strategies, sharing business expertise and offering co-creation opportunities.

Joining forces for the Comprometidos Challenge

In a bid to engage more young people in the creation and development of projects that positively impact society and the environment, we have extended our support of the Comprometidos Challenge. The challenge, the result of a collaboration between Ashoka, Socialab and UNESCO, invites young people in South America to present innovative solutions that solve the challenges they see in their communities and that contribute to the UN Sustainable Development Goals (SDGs). Throughout 2020, our partners identified 100 young entrepreneurs, each of whom was assigned a senior Nestlé executive mentor. Over three months, these mentors helped to develop the skills needed to advance their ideas.

Recognizing the transformative power of the pet-human bond

Every day, a growing field of research is teaching us more about the power of the pet-human bond and the impact it has on the health and well-being of society.

Leading the way, Nestlé Purina has partnered with Ashoka to identify novel ways to improve the lives of pets and their owners across the Europe, Middle East and North Africa (EMENA) region. The Purina BetterwithPets Prize, launched in 2017, rewards inspiring social innovations that reimagine the role of pets in society.

The 2020 Prize awarded prizes across two categories: the piloted category and the idea-stage category. The first was won by the StreetVet Accredited Hostel Scheme. The UK-based initiative offers free, accessible veterinary care to pets whose owners are experiencing homelessness, whether rough sleeping or in hostels. The second category was won by Homely Home in Russia. The organization is revolutionizing rehabilitation by uniting isolated people recovering from addictions with animals looking for a new home.

Vittel stands up for nature with the Act for Biodiversity Challenge

For nearly 30 years, Vittel has been committed to preserving local biodiversity and safeguarding water sources in the heart of the Vosges region of France. The company has engaged local stakeholders such as farmers, scientists and local organizations through a collaborative program known as ‘Agrivair’.

Today, in the face of a growing global ecological crisis, Vittel has scaled up its commitment to nature with an ambition to generate positive impact worldwide. To do so, Vittel partnered with Ashoka to launch the Act for Biodiversity challenge in December 2019. The competition invites people from around the world to submit projects designed to preserve biodiversity in agricultural settings, urban environments and forests. Winners will receive financial support, communication visibility and personalized mentoring from a community of biodiversity experts and Nestlé’s top leaders.

In its first year, five winners were selected from over 200 submissions:

The projects will share financing of EUR 150 000 to develop their ideas. Learn more about the winners on the Act for Biodiversity Challenge website.

In November 2020, Ashoka brought their annual Changemaker Summit online, offering people around the world the opportunity to attend three days of virtual networking and learning sessions from leading entrepreneurs. With over 280 speakers, the summit showcased transformative social solutions from the next generation of changemakers. Nestlé was present at the summit as an Ashoka partner, with several leaders from across our organization attending as speakers during the three days. 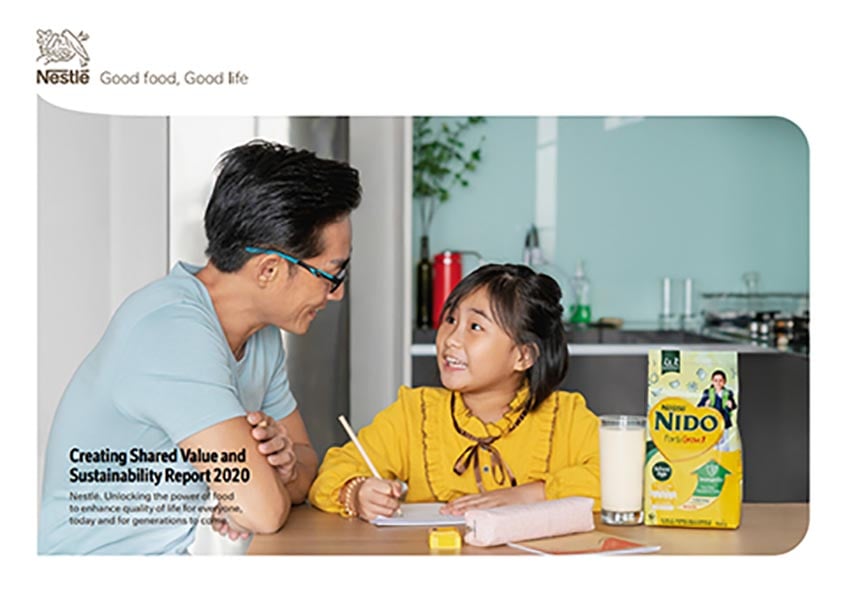